Contemporary legal history is currently gaining more and more public visibility. As the Foreign Office had done previously, the Ministry of Justice and Consumer Protection has now also had its Nazi past investigated by an independent scientific commission. Many other ministries and federal offices have followed suit. Discussions on how violations of human rights in the former GDR were handled, as well as the participation in transitional justice processes in various parts of the world, underline how current this topic is.

In research contexts like this, a point of departure for academic studies is often the tracing of personal or factual continuities that withstand temporal breaks, regime change and political change. Against this backdrop of rigid continuity interwoven with radical breaks, the significance of new legal developments – or lack thereof – is highlighted in its entire 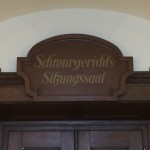 breadth. To then identify the shortcomings of the present and draw conclusions for the future is the hope that underlies this search for knowledge.

Our areas of research extend from the historical developments of international criminal law, in particular the Nuremberg Trials, to how state and society in the former Federal Republic of Germany dealt with its own Nazi past. Contemporary and modern international and national human rights standards serve as our yardsticks and guidelines.

Our location could not be better suited for this work. Nuremberg is the birthplace of international criminal law.  In the city of the Reich Party Rallies, the Allied forces tried the major German war criminals and laid the foundations for modern international criminal justice. They did so in a courtroom from which, only a short time before, a Nazi special tribunal had sown terror. The city of Nuremberg and the Bavarian judiciary accept this responsibility. For a few years now, the courthouse has been home to Memorium Nuremberg Trials, not very far from where the International Nuremberg Principles Academy has its seat. These are only two of the many partners with which we successfully cooperate.

Link to the Chair